Definition from Vectors in Linear Algebra

Definition 1.1 We will call a one-dimensional array of n numbers a vector of size n:

denotes the set of all vectors of size n with components in R. 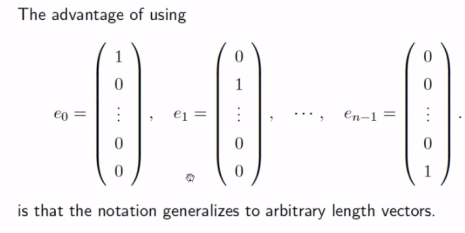 Now we could talk about an algorithm for setting y equal to x. We’re computing y becomes x. We’ve already seen that each of the components of y has to be set to a corresponding component of x. So psi sub i has to become chi sub i. We have to do this for all indices i from 0 to n minus 1. We start indexing at 0, and therefore, if the vectors are of length n, we have to run this until n minus 1. We create an algorithm for this assignment by now writing this as a FOR LOOP. 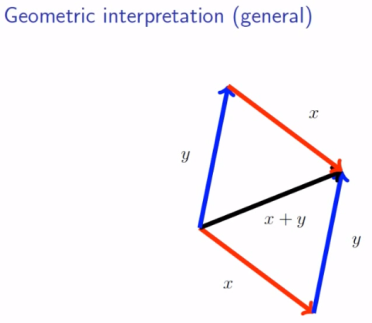 What if instead we want an algorithm that computes vector y as the stretched vector x stretched by a scaling factor alpha? y becomes alpha times x. We expose the components of y. We need to compute alpha times x, where here we expose the individual components of x. And all we need to do is set the appropriate element of y to the corresponding element of x scaled by alpha. If we do this as an algorithm, then what we need to do to set psi i equal to alpha times chi i. 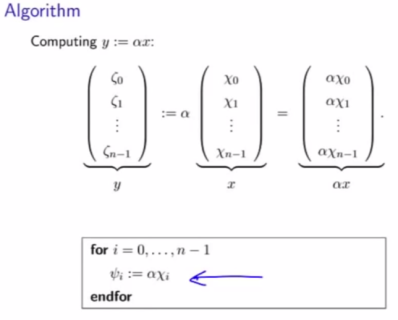 Let’s review the parallelogram method for vector addition. You lay out your vectors as such. And then, the diagonal becomes x:

You can do the same thing for vector subtraction. You lay out your vectors. And then, the other diagonal becomes the vector x minus y. Obviously, you have to make sure that it points in the right direction. 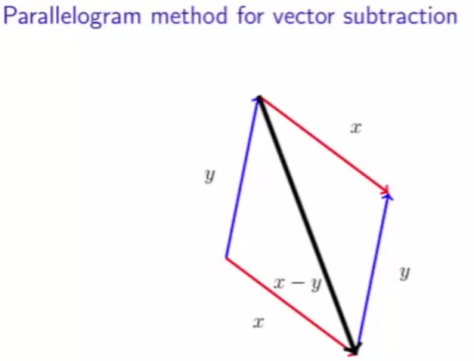 Now, how do you compute x minus y? Well, you expose the different components of vectors x and y. And you simply subtract each component of y off the corresponding component of x.

We’re now going to talk about an operation that is going to be very important as we start looking at more complex operations, and then the algebra later on. It’s hard to picture though. It’s known as the axpy operation, and it takes a vector, scales it, and then adds it to another vector. Given two vectors x and y of size n and a scalar alpha, the axpy operation is given by y is equal to alpha x plus y. 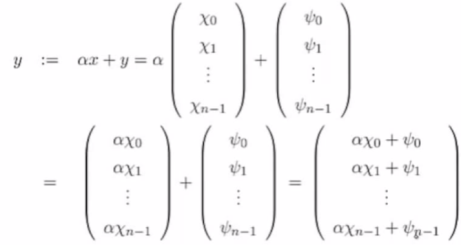 These kinds of vector operations have been very important since the 1970s, and back then the language of choice in this area was Fortran 77. Fortran 77 had the limitation that the variables and subroutines had to be identified with at most six letters and numbers. So they had to be somewhat innovative about how to name operations, and subroutines that implemented them. And the axpy here is simply an abbreviation of alpha times x plus y. So it stands for scalar alpha, the a, times x, plus, p, y–axpy. 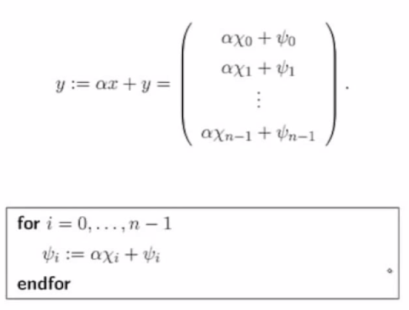 About the AXPY operation, it is often emphasized that it is typically used in situations where the output vector overwrites the input vector y.

Well, instead of writing things like this, we could write them like this. What is that? That’s an AXPY. Why? 0 is a vector. And then this is a scalar times a vector, which you add to that vector. Once you’ve computed this vector, you take a scalar times the second vector and add it to that. So now, the first AXPY, we computed this. The second AXPY computes this. And you can imagine that we can do that for all of the vectors until we’re completely done.

This then motivates the following algorithm. You start by setting w equal to 0. And then for j equals 0 to n minus 1, you perform this operation right here where you take a the scalar chi j times v j and at that to w. So for j equals 0, that’s this operation. That then is stored in w. Then this here is what you do for j equals 1 and so forth.

Shortly, this will become really important as we make the connection between linear combinations of vectors, linear transformations, and matrices.

If we’re given vectors x and y of size n, then the dot product is defined as follows.

Now to motivate an algorithm, let’s look at this slightly differently. Let’s think of this as, take an alpha, and first assigning 0 to it. After that, we multiply the first two components together, and we add that to 0. After that, we multiply the next two components together, and we add that to what already is in alpha, and so forth…This motivates the algorithm given here. You start by setting alpha equal to zero. And then, for i equals zero to n minus 1, you take what is already accumulated in alpha, and you add to it the product of the components Chi i and Psi i. 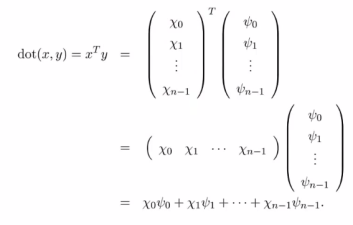 There’s a relation between the dot product and the length of a vector.

And therefore, we conclude that the length of vector x is just a square root of the dot products of x with itself. We summarize that right here.

A vector function is a function that takes one or more scalars and/or one or more vectors as inputs and then produces a vector as an output.

Well, let’s look an an example. So here we have an example of f, which is a function of two scalars. How do we know these are scalars? Well, notice that I’m using Greek letters. We agree that the Greek lowercase letters we were going to use for scalars. So it takes two scalars as input, alpha and beta, and then produces a vector of size two as output, where the first component adds the two input scalars and the second component subtracts the second scalar from the first scalar.

Let’s do another example. Here we have a function of the scalar and a vector of size three. And the output is that vector, except that each of its components has been changed by adding the scalar to it. So if you want to evaluate this function for a specific input, -2 for the scalar and the vector 1, 2, 3, then again what we need to do is substitute the -2 in for alpha. And we need to substitute 1, 2, and 3 in for the components of the vector that’s the input.

We have seen other examples already. We saw the AXPY operation, which if you think of it as a function, is the function axpy of a scalar alpha and then vectors x and y. And the output is the vector alpha times x plus y. We also saw the DOT function. And notice that in the DOT function, you have two vectors as input, x and y. And the result is the DOT product of the two factors, which is a scalar. Now you might say a scalar is not a vector. But we’re going to think of a scalar often as a vector of size one.

What we will see in the next unit is that we can think of these vector functions as mapping one vector to another vector.

Vector Functions that map a vector to a vector

In the previous units, we looked at a function that took two scalars as input and produced a vector as an output.

We can look at a function g that takes as input a vector with components alpha and beta and then produces the exact same vector as the function f produced.

Here was another example of a function that took as input a scalar and a vector.

We can instead look at a function g, but now stacks scalar on top of the vector creating a vector that is of size four instead of the size three vector that we had before and then evaluates in exactly the same way. 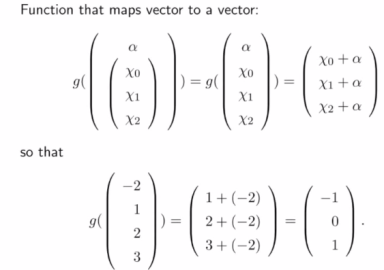 The whole point being that now we have a function that takes as input a vector and as output, produces a vector.

So in summary, this insight allows us to focus on vector functions that simply take one vector as input and produce one vector as output. What we will see next week is that there’s a special class of such functions called «linear transformations» that are of great importance to linear algebra.