Effects of the addition of zeros: the addition of a zero to the open loop transfer function has the effect of pulling the rootlocus to the left, with which the system tends to be more stable, and also accelerates the settlement of the response. The effect of such control is to introduce a degree of foresight to the system and speed up the transient response.

To illustrate this effect, let’s look at the following example:

Suppose we are in the presence of a system with an unstable plant. An example of such a situation is the following:

We know from Block Algebra and Transfer Function theory that the open loop transfer function of this system Gd (s) is:

We also know that the rootlocus is drawn with the open loop transfer function of this system Gd (s), for which we can use the following command in Matlab:

Analysis: In graph 1 we can see that the system is unstable for all positive values ​​of gain K. That is, if we move through the blue and green curves, varying the value of K, as in graph 2, where K1 = 0.143; K2 = 3.66 and K1 = 30.5, respectively, we see that the poles of the system are located on the right side of the s-plane, and therefore it is an unstable system: 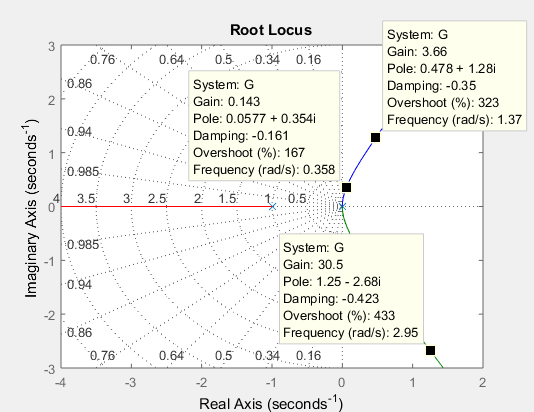 Let’s apply the principle of addition of a zero to the open loop transfer function for this case. We are going to add a zero at s = -0.5 (Figure 2), therefore the Gd (s) of the system is:

Let’s see the effect of adding a zero to the system by: 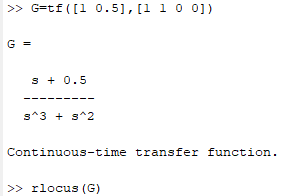 Analysis: In graph 3 we see that the LGR of the system has shifted to the left and that the system is stable for any positive value of the gain k, that is, that all the poles of the closed-loop system are located on the left side from plane s (Graph 4), an essential condition for the system to be stable:

School of Electrical Engineering of the Central University of Venezuela, Caracas.

School of Tourism of the Simón Bolívar University, Núcleo Litoral.