To better understand the concept of an open-loop system, consider the following scheme, which represents a very frequent and basic component in every electromechanical system, a Potentiometer: 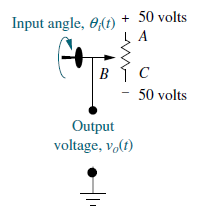 In practice, the operation of this system is simple. Needle position B (control variable) depends on angular displacement desplazamiento Θi(t) (system input). The position of the needle determines a voltage Vo (t) (system output, controlled variable) that can have a value between +50 and -50 volts. In this system, the output does not affect the control action, which is the mechanical movement of the hand (controller). Therefore, it is an open loop system, which we can represent by the following block diagram:

If we wanted to configure the system of Figure 2 as a closed loop system, we would have to measure the output, first, and compare it with the reference signal, secondly, so that a Controller executes the controlling action based on the result of this comparison. This process could be represented by the following diagram:

Quite often, the Potentiometer in Figure 1 is the component that activates a DC Motor as shown in the following example:

The system of Figure 4 is another example of an open-loop electromechanical system, which involves a greater number of components, including the use of a DC Motor and a Gearbox that allows to transform a rotational movement into a translational displacement, but in which the output does not influence the controlling action.

The following system, on the other hand, also has a Potentiometer that measures the displacement at the output and this measure influences the control action:

The system of Figure 5 is a closed loop electromechanical system that compares the output voltage c with the input voltage r. This comparison is manifested as a voltage difference ev=r-c that then feeds a Differential Amplifier, which in turn activates a DC Motor that, through a Gear system, moves the Potentiometer c. This process is repeated until ev=0, that is, until r = c. In other words, the system looks for the output to match the input, so this system is called the automatic input follower system, Position Control System or Servosystem.

When a DC Motor is part of a Servo System, it is called Servo Motor. The Position Control System is one of the most used essential mechanisms in engineering, hence its great importance.

Literature review made by: