Many components and actuators have non-linear characteristics and the effectiveness of their action requires that they remain at the point of operation where they act approximately linearly, which can be a very limited interval. For example, the music that we all hear must be amplified by a circuit composed of electronic devices that only amplify the signal when they are acting at the point of operation in which the system is designed to act linearly; proof of this is that the output of the system as a whole is proportional to the input, that is, a linear system.

What is linearization? It is to express a non-linear function or differential equation with an approximate linear version, only valid in a very small range of values of the independent variable. Something like expressing a quadratic function by the mathematical formula of a straight line. To what end? Well, to be able to apply to the system represented by this function all the control techniques for linear systems studied up to now. Our objective is to design a strategy to generate a linear equation that represents a non-linear system in a very limited region, a strategy that we configure next.

To obtain a linear mathematical model of a non-linear system it is necessary to suppose that the variable to be controlled only deviates very slightly from an operation point A of coordinates (xo, f (xo)), where xo is the input to the system and f (xo) is the output. At point A we can place a line with a certain slope and assume that for small changes δx around xo we have the output f (xo+δx) moving along this line, as shown in Figure 2-47:

In the same way that:

The latter is a linear mathematical approximation for f (x).

This technique allows us to obtain a linear expression for f (x), around the point of operation A. Now, we are going to combine the obtained expressions for f (x) and δf (x). Another way of thinking it is to think that, around the point of operation A, f (x) has the value of f (xo) plus a small component of value maδx along a straight line of slope ma:

Where (x-xo) is so small that it approaches δx. Mission accomplished, we will do this:

What theory allows us to do this? The Taylor series.

When the excursion around the point xo is small, as the case that interests us, the derivatives of higher order can be ignored, so:

Knowing that the mx slope of a line at point xo is the derivative of the line evaluated in xo, we can adapt this last equation to our strategy and we obtain the formula that interests us:

Where mx = df / dx evaluated at x = xo. Note that δx is now the independent variable, for which we use only a valid range of values around xo, so that δx is an excursion. Returning to Figure 2.47, this is the key tactic of the linearization process, we have created a coordinate system centered at point A, to replace the independent variable x with δx. We can continue using the δx notation or any other more practical notation such as:

Let’s see how this works through examples.

Suppose we have a system represented by the following function:

We find the following values and substitute them in the previous equation:

Then we can represent our nonlinear system by means of the following negative line equation: 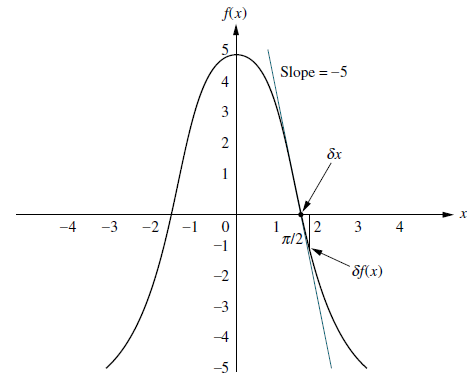 Suppose now that our system is represented by the following differential equation:

The presence of the term cosx makes the previous one a non-linear equation. It is requested to linearize said equation for small excursions around x = π / 4.

To replace the independent variable x with the excursion δx, we take advantage of the fact that:

We proceed then to the substitution in the differential equation:

We now apply the derivation rules:

And for the term that involves the cosx function we apply the same methodology that we have just seen in the previous example for a given function, that is, linearize f (x) around xo = π / 4:

Note that in the previous equation the excursion is zero when the function is evaluated exactly at the point xo. The same happens when the slope is evaluated in xo: 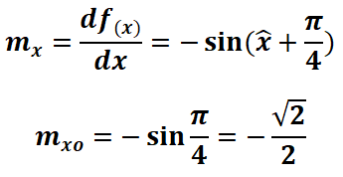 Therefore, we can rewrite the differential equation in a linear fashion around the point xo =π /4 as follows:

That is to say:

The Taylor series enables us to work with functions or differential equations that have two independent variables. In this regard, the Taylor series applies the following formula:

The magnetic suspension system of a sphere is shown in Figure 1.

The objective of the system is to control the position of the steel sphere by adjusting the current in the electromagnet through the input voltage e(t). The dynamics of the system is represented by the following differential equations:

It is requested to linearize the system around its equilibrium point.