Formalization helps identify areas of ambiguity as well as inconsistencies and omissions in a requirements specification. Once developers identify problems with the specification, the address them by eliciting more information from the users and the client. Requirements elicitation and analysis are iterative and incremental activities that occur concurrently.

An Overview of Analysis

Analysis focuses on producing a model of the system, called the analysis model, which is correct, complete, consistent, and verifiable. Analysis is different from requirements elicitation in that developers focus on structuring and formalizing the requirements elicited from users (Figure 5-2). 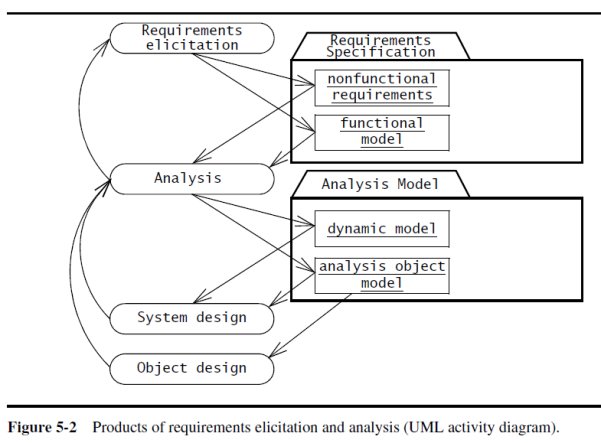 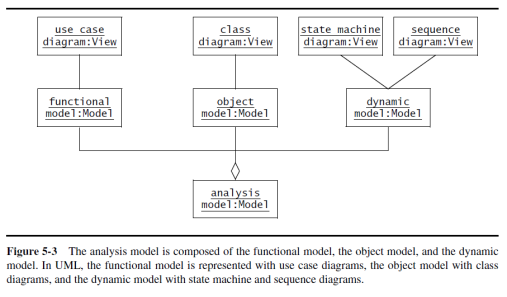 In the previous chapter, we described how to elicit requirements from the users and describe them as use cases and scenarios. In this chapter, we describe how to refine the functional model and derive the object and the dynamic model. This leads to a more precise and complete specification as details are added to the analysis model.

The dynamic model focuses on the behavior of the system. The dynamic model is depicted with sequence diagrams and with state machines. Sequence diagrams represent the interactions among a set of objects during a single use case. State machines represent the behavior of a single object (or a group of very tightly coupled objects). The dynamic model serves to assign responsibilities to individual classes and, in the process, to identify new classes, associations, and attributes to be added to the analysis object model.

The analysis object model consists of entity, boundary, and control objects [Jacobson et al., 1999]. Entity objects represent the persistent information tracked by the system. Boundary objects represent the interactions between the actors and the system. Control objects are in charge of realizing use cases. In the 2Bwatch example, Year, Month, and Day are entity objects; Button and LCDDisplay are boundary objects; ChangeDateControl is a control object that represents the activity of changing the date by pressing combinations of buttons.Modeling the system with entity, boundary, and control objects provides developers with simple heuristics to distinguish different, but related concepts.

To distinguish between different types of objects, UML provides the stereotype mechanism to enable the developer to attach such meta-information to modeling elements.

For example, in Figure 5-5, we attach the «control» stereotype to the ChangeDateControl object. In addition to stereotypes, we may also use naming conventions for clarity and recommend distinguishing the three different types of objects on a syntactical basis: control objects may have the suffix Control appended to their name; boundary objects may be named to clearly denote an interface feature (e.g., by including the suffix Form, Button, Display, or Boundary); entity objects usually do not have any suffix appended to their name.

Modeling with UML, inheritance enables us to organize concepts into hierarchies. At the top of the hierarchy is a general concept, and at the bottom of the hierarchy are the most specialized concepts.

Generalization is the modeling activity that identifies abstract concepts from lower-level ones.

Specialization is the activity that identifies more specific concepts from a high-level one. 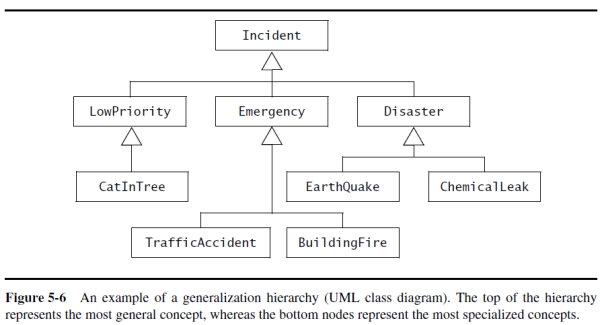 Analysis Activities: From Use Cases to Objects

In this section, we describe the activities that transform the use cases and scenarios produced during requirements elicitation into an analysis model. Analysis activities include:

Participating objects form the basis of the analysis model. Natural language analysis is an intuitive set of heuristics for identifying objects, attributes, and associations from a requirements specification. Abbott’s heuristics maps parts of speech (e.g., nouns, having verbs, being verbs, adjectives) to model components (e.g., objects, operations, inheritance relationships, classes). Table 5-1 provides examples of such mappings by examining the ReportEmergency use case: 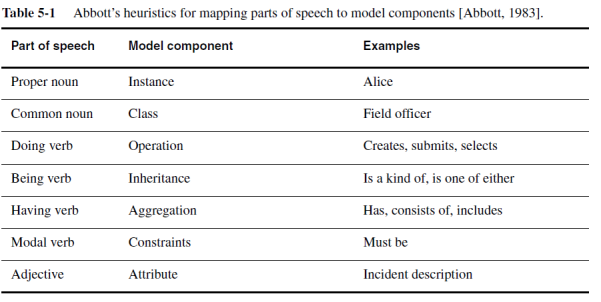 The following heuristics can be used in conjunction with Abbott’s heuristics:

As it was mentioned before, Entity Objects represent the persistent information tracked by the system. For entity objects we recommend always to start with the names used by end users and application domain specialists. Describing objects, even briefly, allows developers to clarify the concepts they use and avoid misunderstandings (e.g., using one object for two different but related concepts).

For example, after a first examination of the ReportEmergency use case (Figure 5-7), we use application domain knowledge and interviews with the users to identify the objects Dispatcher, EmergencyReport, FieldOfficer, and Incident. Note that the EmergencyReport object is not mentioned explicitly by name in the ReportEmergency use case. Step 4 of the use case refers to the emergency report as the “information submitted by the FieldOfficer.” After review with the client, we discover that this information is usually referred to as the “emergency report” and decide to name the corresponding object EmergencyReport. 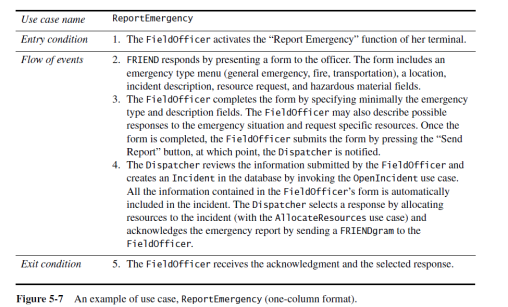 The definition of entity objects leads to the initial analysis model described in Table 5-2. 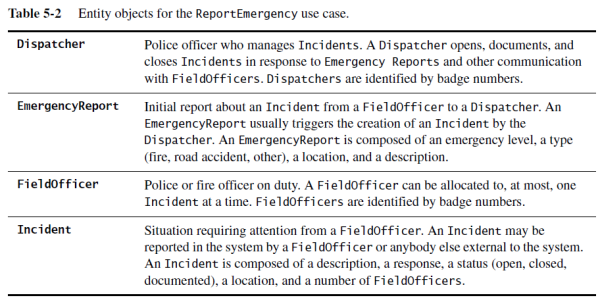 Boundary objects represent the system interface with the actors. In each use case, each actor interacts with at least one boundary object. The boundary object collects the information from the actor and translates it into a form that can be used by both entity and control objects.

We find the boundary objects of Table 5-3 by examining the ReportEmergency use case. 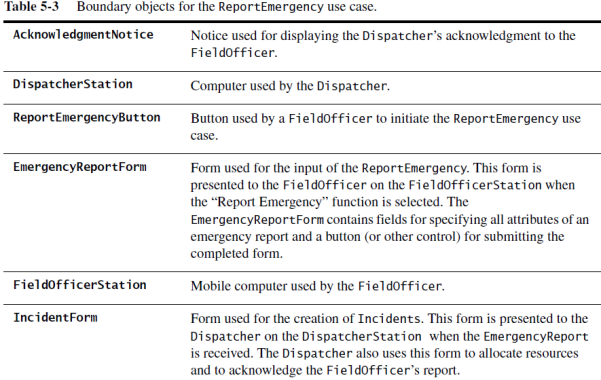 The decision to model the control flow of the ReportEmergency use case with two control objects stems from the knowledge that the FieldOfficerStation and the DispatcherStation are actually two subsystems communicating over an asynchronous link. 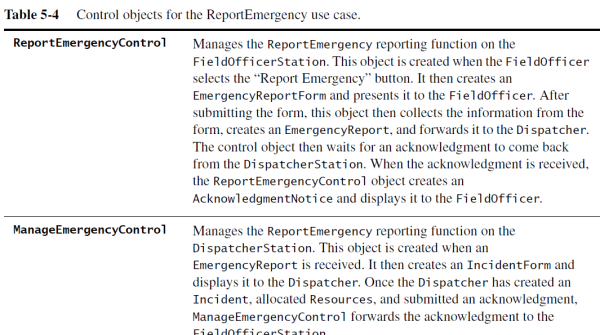